The Ouroboros King combines the strategic tactical depth of chess with the build variety and replayability of roguelikes. Build a formidable army, discover powerful relics, and buy surprising gadgets to defeat the three evil witches.

Currently in development, will keep uploading updated builds as the development progresses.

awesome game i love it

Thanks! Glad you liked it

Check in settings for an item called "The Finisher" That item is essentially a stalemate breaker (You auto kill the king if your opponent only has the king, and you have more than 1 pieces)

Sure, although it's difficult to find a piece you can't mate a bare king with in this game (only knights I think, and even then the enemy king doesn't seem to avoid being forced to walk into mate).  But what I'm talking about is a situation where you start down so much material that a draw is really the best you can hope for, which happens more often than not on the highest difficulty setting currently.  That would be fine if threefold repetition resulted in a draw like in regular chess, as there are lots of times a perpetual check or threat to win material that forces repetition can be engineered against the computer at such a level even though mate can't really be.  But, as is, it's kind of annoying to put the opposing king in perpetual check and then just be stuck in an infinite loop which you lose if you break.

Although either it updated or I'm crazy or something, because playing 1800 again it didn't have more pieces than me and exclusively max-level pieces on the first level anymore.

So... You may wanna balance some stuff.  I got a portal mage, and I got the 'move twice on turn one' item, and that is M0 against any enemy with an open space orthogonal to their king on turn 1.  That, to me, seems like a problem.

Hi xyncht, thanks for pointing that out. I think for the demo it's ok, as it allows players to discover cheese strategies. In the final version, you'll be able to discover the portal mage when the enemy already has enough pieces.

Here is my playthrough

Bugs are mostly fixed, the shop mechanic is great, and being able to choose between multiple items is really nice.

Magnus Carlsen's face ahahahah. Nice concept! A full game like this could be very cool.

I'm working on it, you can wishlist the game on Steam:
https://store.steampowered.com/app/2096510/The_Ouroboros_King/

Love how the Fool completely turns the game on its head lol, although it sadly can't move after another Fool which should be patched

Also, I think there could be an option where you can't make a move that would result in you being in check because that's how chess websites usually are and it's a cool QoL feature

I picked my rating level and was expected to do a knight/bishop mate? okay. A little tough. It's a very slick design and interface. The AI seems to be good as far as I can tell. Overall, an impressive game on this platform. The aesthetics need something to make it more commercially viable I would say. It's still a bit vanilla looking.

Stalemate is a win for you in this game, though, so mate with knight+bishop is a lot easier (and even two knights is theoretically forcible, but obviously pretty tough)

this is a LOT of fun, only managed to win on my first run (got lucky). i love this whole thing.

I found a bug, I think Bodyguard doesn't work if it's used more than once, even if you restart a game from the menu https://imgur.com/a/7gQCPbE

Hi David, again you are correct. I had that one on my radar and I'll hopefully update a fix this week. Thanks! :D

It says turret reaches four squares in each direction but it only reaches three?

My bad, the behavior is correct, but the text isn't. I'll change it on the next update. Thanks for noticing.

That was awesome! I really enjoyed this and I'd love to see more of it, but I think a difficulty option would be pretty important so people who don't know chess could have fun with this too. (or maybe more of an open world type of thing where you can select which levels you wanna play (and at that point a level editor))

The description for the pegasus was missing the part where it can move 4 squares but I think that was the only issue I noticed, also maybe that one of the selectable upgrades was the one I already had.

I dunno if you need some ideas but I'll give some anyways, a powerup that would show the top engine moves once per game could be pretty interesting, also levels where the board isn't an 8x8 but something else, and maybe not even a square.

Maybe a piece that could revive a fallen piece on death, or maybe just a pawn. (Now that I think about it there were no pawns in the game)

Also, this might be hard to implement but maybe multiple opponents at the time and they'd fight against you and the other opponents, and then you could have a level where you're in the middle of a board and have to survive until the opponents battle it out.

And I think it would be pretty hard to balance some levels as the game continues so maybe levels where you have predeterminate pieces and you can only add a few to it from your army. (and at that point you might as well be able to add some to your opponent to counterbalance the fact that people will just upgrade all of their pieces)

Also, you could have squares that break if you stand on them for too long, and a river that pushes the pieces in them one square each move.

But yeah, very neat game, had a blast with it and I'm very glad I learned how to do a knight and bishop mate because I needed it here, although I just realized that stalemates are probably not a thing but I guess it's too late now, but yeah, thanks for the game!

Thanks for the suggestions and the pegasus bug report. Just fixed the pegasus thing, and I take note of your ideas as I may implement some of them later.

Oh yeah and being able to draw arrows would be useful too, thanks for improving the game!

Hi Resliot and thanks for the feedback. Constructive feedback like this helps me improve the game.  Regarding your points:

Overall great feedback, thanks for your effort!

Hey very good concept! Love the idea, and execution.
A bit of a tutorial for special pieces would be appreciated cause i got obliterated by a pegasus that captured all of my pieces before i realized its movements haha.

Anyway this is a great game that maybe need a bit of polish!

Edit: I just seen it doing me "mega-forks" is this AI a grandmaster? :D

Why is the ai that of a grandmasters? i can't beat the first level because it is too smart and is literally unbeatable, I like the concept, but is very unbeatable

Hi D4RKW0LFR1SING, I agree the first levels are too complicated. I've adjusted the enemy army strength a bit. Thanks for your feedback!

Like it, but I think there should be an option to change the red visibility, kinda hard for me to see where the units can move

Hi, thanks for the feedback. The issue is the color or maybe the lines being too thin?

The lines are fine, I can see where my units can move pretty well, but I cannot see the movements of the opponent's units.

Thanks, I'll try to make it less transparent so it's easier to see. 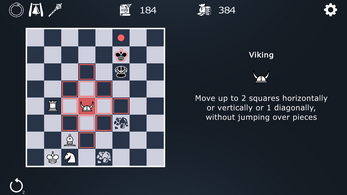 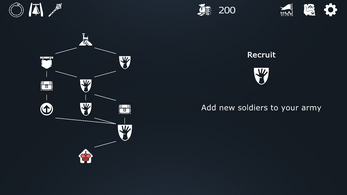 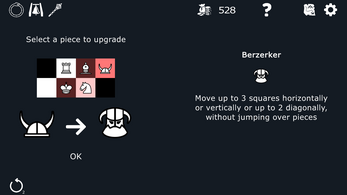 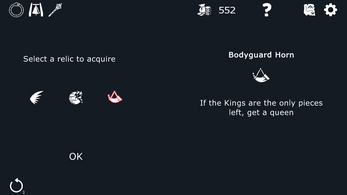